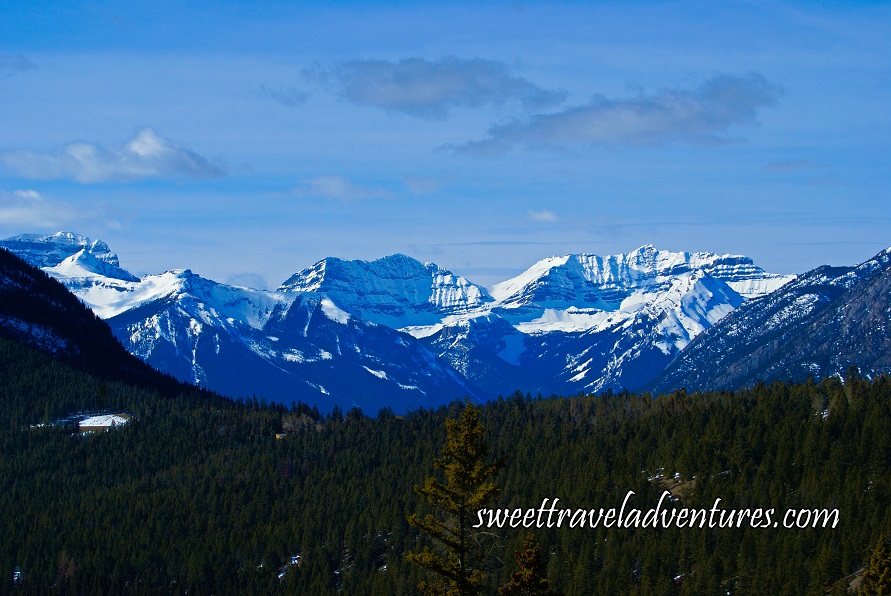 Banff National Park is known worldwide as a place of incredible beauty. It is located in the Rocky Mountains, about 1-1.5 hours west of Calgary, in Alberta, Canada. Every year the park attracts approximately 4 million visitors, many from all over the world, due to its breathtaking scenery. It is one of the most visited national parks in Canada as well as North America. It is also Canada’s oldest national park, as it was established in 1885, North America’s second national park (founded after Yellowstone National Park), and the world’s third national park. Moreover, Banff National Park is a year-round tourist destination with its peak season in July and August. The park is a UNESCO World Heritage Site and spans 6,641 square kilometres (2,564 square miles) of protected wilderness areas containing valleys, mountains, glaciers, forests, meadows, lakes, rivers, waterfalls, hot springs, and a large variety of wildlife.

The Rocky Mountains, also commonly called the Rockies, were initially formed from 80 million to 50 million years ago from shifting tectonic plates and erosion by glaciers. The Rockies stretch from Canada to the United States. The Canadian Rockies consist of shale and limestone and have an extensive number of high peaks and northwest-southeast trending ranges. The highest mountain entirely located in Banff National Park is Mount Forbes, with a height of 3,612 metres (11,850 feet). Although Mount Assiniboine is slightly higher than Mount Forbes at 3,618 metres (11,870 feet), it is only partially situated in Banff National Park and actually stands in three parks, including; Banff National Park, Kootenay National Park, and Mount Assiniboine Provincial Park.

There is a wide variety of plants, wildflowers, and wildlife as 96 percent of Banff National Park is wilderness. Some other interesting facts are that there are over 1,000 glaciers in the park and the Bow River in Banff flows as far as Hudson’s Bay. 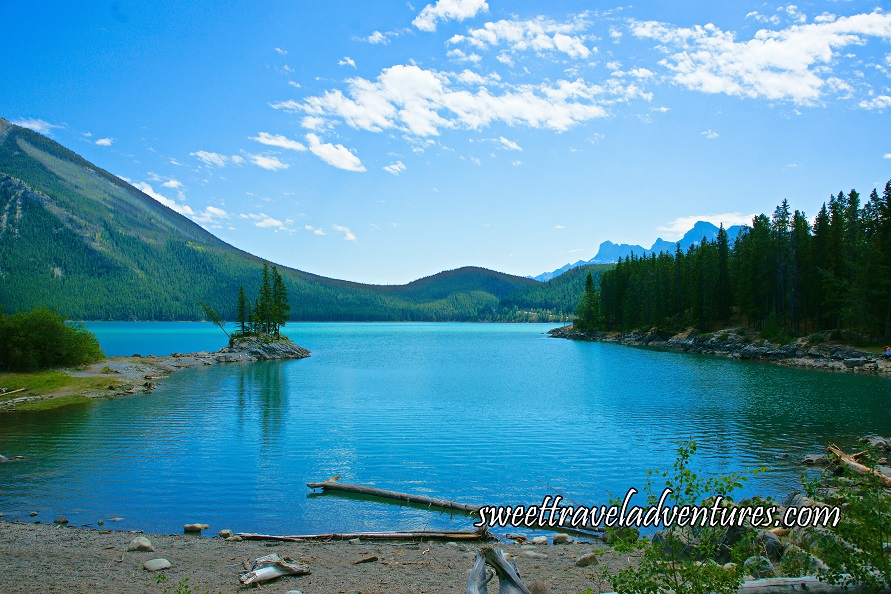 Here is some detailed information about Banff National park that will help you to better plan your visit and get the most out of your trip:

Banff National Park is an unspoilt wilderness and a wonderful place for singles, couples, families, nature lovers, outdoor enthusiasts, athletes, and artists. There are a large number of cultural events, festivals, and sporting events that take place in the park throughout the year. Celebrities may be spotted in the area as there are occasionally star studded fundraising events or festivals frequented by high profile Hollywood actors and actresses. Other popular activities in Banff National Park include hiking, downhill skiing/snowboarding, cross country skiing, angling/fishing, mountain biking, cycling, mountaineering, snowshoeing, dog sledding, horse-drawn sleigh rides, bird watching, ice skating, horseback riding, canoeing, white water rafting, golfing, and ski touring, among many others.

Several activities are prohibited in Banff National Park as they are not compatible with the park’s goals of conservation. The activities that are not allowed include; collecting natural objects (such as wildflowers, rocks, mushrooms, berries, etc.) or cultural objects (for example, arrowheads), hunting, motorized off-road travelling, ice fishing, snowmobiling, paragliding, parachuting, hang gliding or any heavier-than-air aircraft, and use of personal watercraft (such as Sea Doos, Jet Skis, etc.) or water skiing equipment. 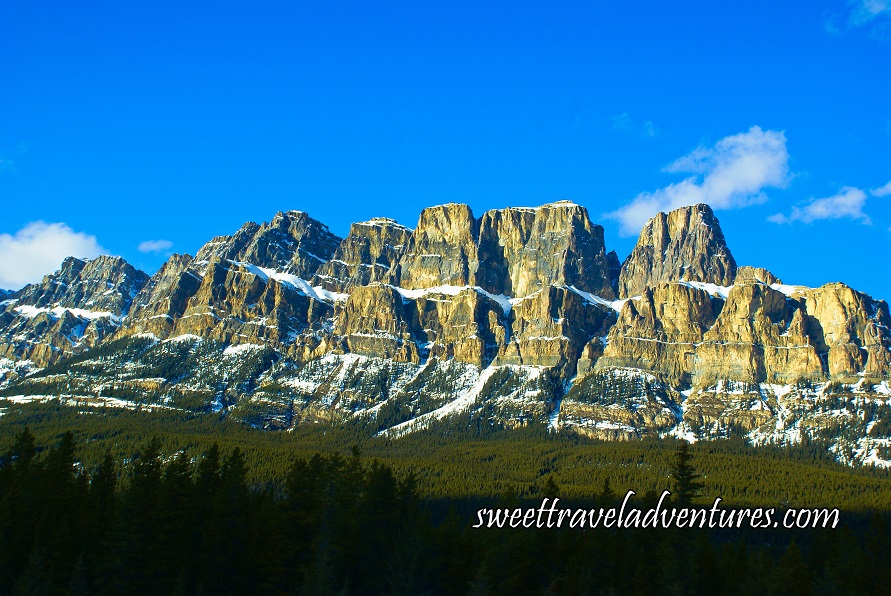 Many precious ecosystems exist in Banff National Park, which are further divided and classified based on vegetation, landforms, and soil. This land classification system identifies similar regions within the park so as to better manage the park’s ecosystems. The three major ecoregions or zones are: the montane, subalpine, and alpine.

The montane region contains valleys, grasslands, alders, willows, birches, cottonwoods, Douglas firs, and lodgepole pines. Most of the wildlife is found in this region.

The subalpine region is comprised of forest, mostly made up of spruce and pine trees, that extends from the montane region up to about 1,981 metres (or 6,500 feet).

The alpine region (above the treeline) consists of rocky terrain and is positioned at the highest elevations in the park. This, along with the cold strong winds, mean few plants and animals can survive there. 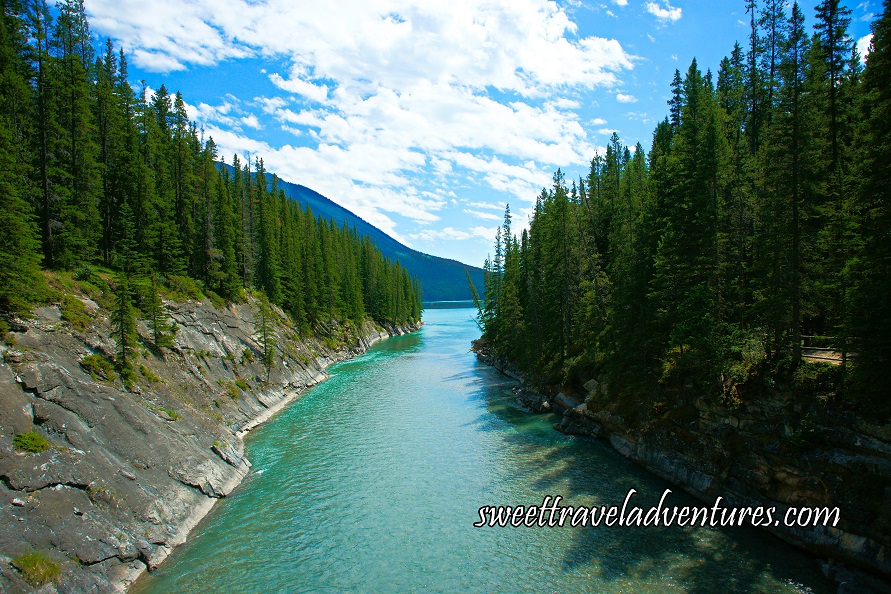 It is very common to encounter wildlife in Banff National Park; including in the town of Banff, along the side of the road, and even while hiking. On some trails it is mandatory to carry bear spray in case of an encounter with a bear as there are many grizzly bears and black bears in the area. There is a large variety of trails accessible to hikers including back country trails, however for safety reasons the back country should only be explored with a licensed guide or with someone with a number of years of back country experience in Banff National Park as the backcountry is quite isolated and can be quite rough terrain, not to mention increased chance of meeting wildlife such as cougars, and a high threat of avalanches occurring.

Banff National Park is the home of approximately 53 species of mammals as well as amphibians, reptiles, fish, birds, and insects. Some of the animals in this preserved area are rare or endangered. It is quite common to see elk, deer, mountain goats, chipmunks, squirrels, birds, and trout. Other animals in the park include Woodland caribou, wolverines, lynxes, frogs, salamanders, toads, garter snakes, various fish, harlequin ducks, shrews, bats, bighorn sheep, hares, geese, eagles, and the mountain pine beetle, among many others. This large diversity of animals in the park results from the wide range of habitats due to variations in elevation, climate, and plants. 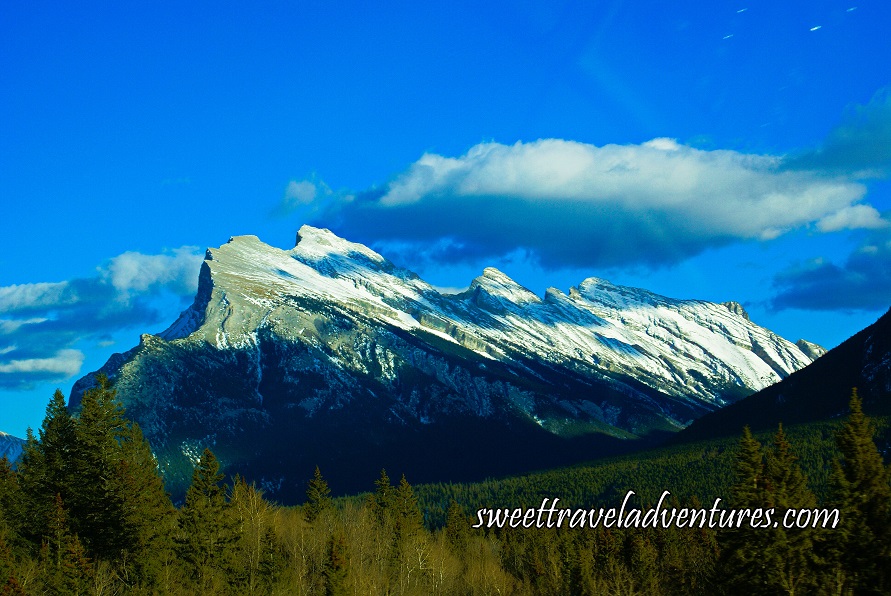 Banff National Park has a subarctic climate with mild summers and cold, snowy winters which are often moderated by Chinook winds (warm winds). The warmest temperatures occur in July (summer), with average daily highs of 22°C (72°F) and daily low temperatures averaging 7°C (45°F) for the town of Banff. The coldest month is January (which is in winter) with the mean high temperature of −5°C (23°F) and the mean low temperature of −15°C (5°F) for the Town of Banff. It is important to note that the temperature can drop into the minus thirties in winter. The relatively dry air, however, helps make even extreme temperatures more bearable, unless there is a wind chill. If there is a wind chill the temperature may feel a lot colder. Fortunately, Chinook winds frequently occur so extreme temperatures do not usually continue for more than a couple of weeks at a time. 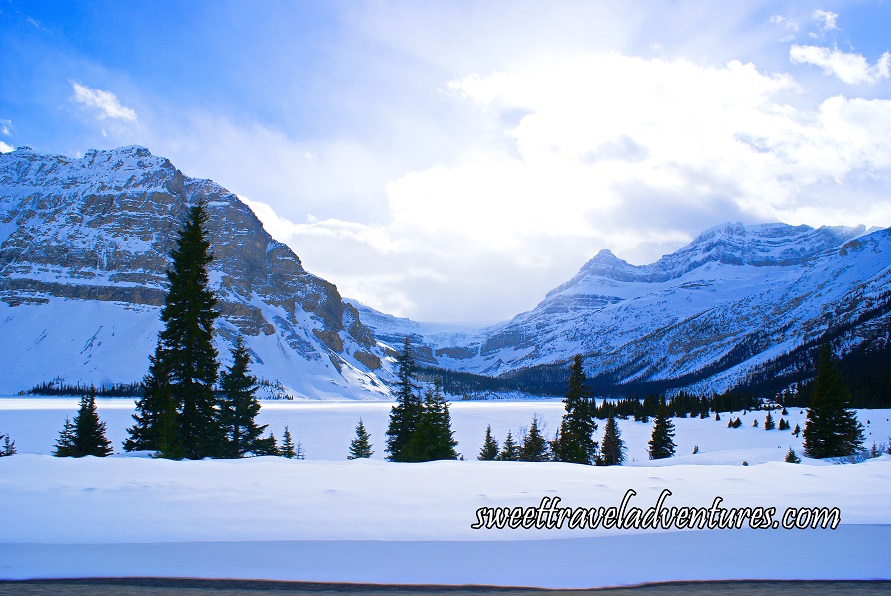 The length of day in Banff National Park fluctuates greatly throughout the year. In December daylight may last as little as eight hours while at the end of June when the day is longest, daylight may last as much as 16.5 hours with the sun rising at about 5:30 am and setting at approximately 10:00 pm.


Things to Be Aware of: 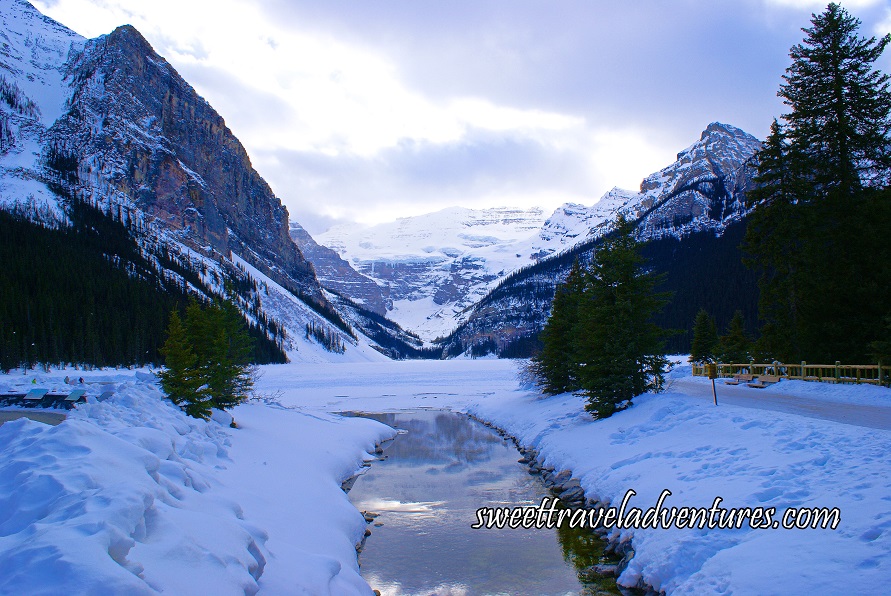 How to Get to Banff National Park

The Major Highways in Banff National Park Include:

Another option is to get to Banff by train, as there is a sightseeing rail service between Banff and Vancouver, but the service is limited and can be quite expensive. 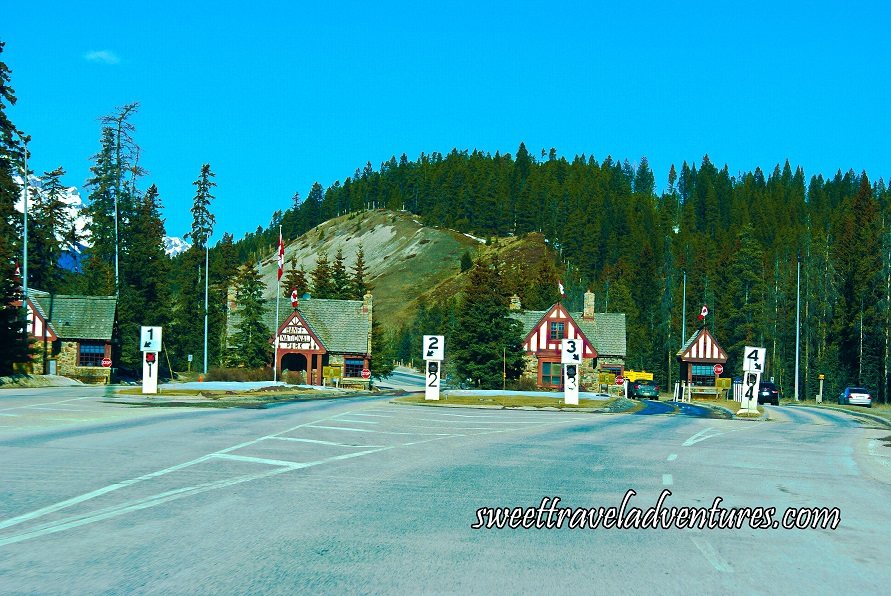 Entry Gates to Banff National Park Between Canmore and the Town of Banff, Alberta

All visitors to Banff National Park require a park permit. One can be obtained at the park entry gates or at one of the Visitor Centres. A new alternative is purchasing the parks pass online. Day passes and annual passes for one adult or a family/group are available which must be put on the left-hand side of your vehicle’s dashboard or on the rear-view mirror with the date visible through the window. The annual pass, also called the Discovery Pass, is more cost effective if you are going to spend 7 or more days in Canada’s national parks as this pass grants unlimited free access to many of Canada’s national parks as well as many of Canada’s national historic sites and national marine conservation areas for a period of one year. If you decide to purchase an annual pass online you can print off a temporary ticket to use before the pass arrives in the mail.

Visitors who have already purchased a Banff National Park Pass or a Discovery Pass, or those who do not intend to stop in the park are allowed to take the drive-through lane at the entrance of Banff National Park (the farthest lane on the right). If you are just passing through Banff National Park in transit to another destination and do not stop in the park then it is not necessary to purchase a permit. However, if you stop, even for just a few minutes to take a photo, take in the view, fill up gas, or have a meal, then a pass must be purchased. The park fees go towards the maintenance and preservation of Canada’s national parks and historic sites.

Hope you enjoy your visit to Banff National Park, one of my favourite national parks, and a must-see attraction near Calgary! 🙂

What is your favourite national park?


Entry to Banff National Park was with a complimentary Discovery Pass courtesy of Parks Canada. As always, all opinions are 100% my own.

6 thoughts on “Banff National Park: The Gem of Western Canada!”