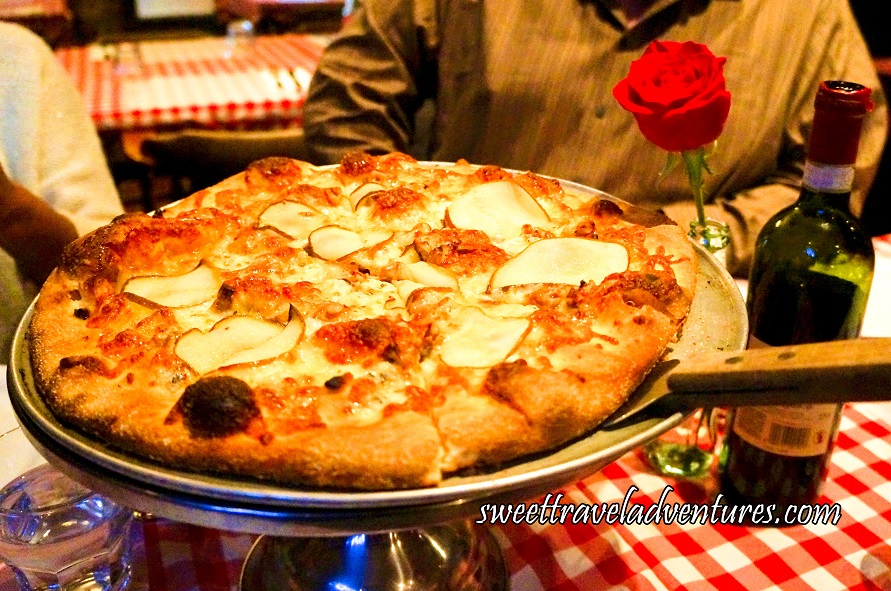 I simply love food and everything to do with eating. What better place to indulge than in the most multicultural city in the world, Toronto, Canada? The food is as diverse as the people, with an endless number of food options to choose from. Since there are so many ethnic quadrants in Toronto, I decided to experience one of them in greater depth by going on a food tour. I love Italian cuisine so I chose to go on the Little Italy Food Tour, the “Chef’s Tour” with The Culinary Adventure Co.

This food tour company is “Chef owned and operated” and offers gourmet food experiences in more than a dozen different neighbourhoods in Toronto and is constantly adding new tours, not to mention adventure weekend/food tour excursions, a signature dinner series, cooking classes, and other special events. They have been awarded a Trip Advisor Certificate of Excellence two years in a row, as well as won the 2012 Ontario Culinary Tourism Award. What better way to get to know an area than through its stories and food?

Toronto has the largest Italian community outside of Italy. Little Italy is one of the Italian districts in Toronto and is known for its numerous Italian restaurants, trattorias, cafés, bakeries, fashion stores, food markets, beauty salons, gift shops, and businesses that run along College Street, from Bathurst Street to Ossington Avenue. There are also now many restaurants of other ethnicities, due to the large Portuguese and Asian community in the area. As the Italian immigrants moved out of the neighbourhood, new immigrants from other countries arrived, creating a multicultural and dynamic neighbourhood. Little Italy has also become a mix of newer and long-established restaurants. During the culinary tour we visited two Italian eateries and a Japanese restaurant, to reflect the make-up of the area. Along the way we also sampled some wines. 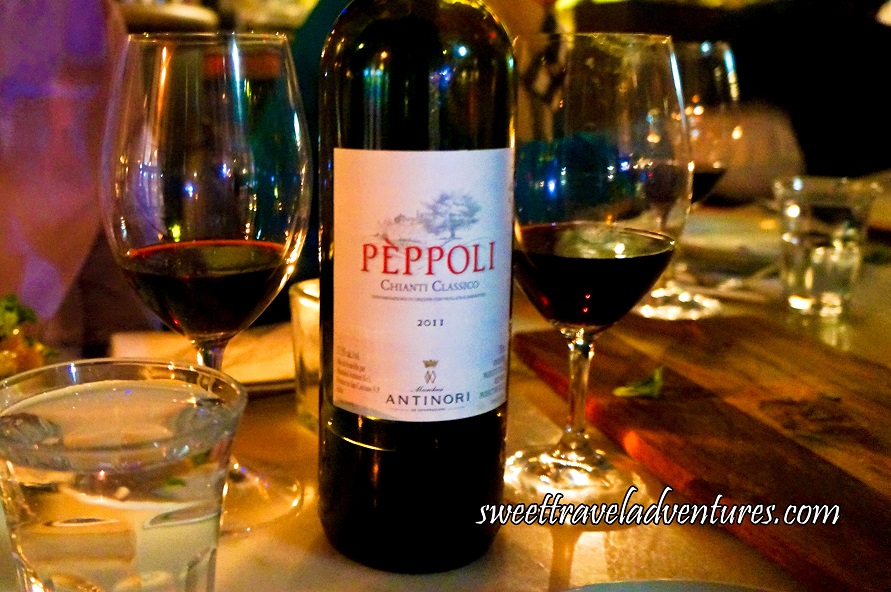 The first establishment we visited was Sotto Voce Wine and Pasta Bar, a 20 year old Sicilian restaurant located on the corner of College Street and Clinton Street. It serves “traditional Italian comfort food and numerous wines by the glass in a relaxed atmosphere.” In summer there is also a patio open. When we arrived we were brought a Chianti wine, a red wine produced in the Chianti region of Italy (in central Tuscany), that must be made from at least 80% Sangiovese grapes. This 2011 Antinori Pèppoli Chianti Classico DOCG wine is made up of 90% Sangiovese with a 10% Merlot and Syrah blend. It was medium-bodied, fruity, and quite smooth and easy to drink. We all liked it very much.

Along with the wine we were served Crostini Chianti Figs (figs caramelized in chianti, with prosciutto and marscarpone on slices of grilled baguette), Crostini a Lemone (bosc pears caramelized in lemoncello, with arugula and goats cheese on slices of grilled baguette), and Vigne (green grapes roasted with grappa, mozzarella di bufala, and prosciutto). After a while we were brought Cozze (a large bowl of mussels steamed in pinot grigio with chorizo, cherry tomatoes, and cannellini beans). We opted for the vegetarian option so we did not have chorizo in ours. I normally hate mussels since I find them very fishy and rubbery, but these were neither of the two, and instead had a nice refreshing flavour which resulted in wanting to eat more and more, until the bowl was empty. We were told by Chef Scott that this is the way mussels taste when they are very fresh. We also ate Sicilian Meatballs (all beef meatballs made with currants and pine nuts, slow cooked in Sotto Voce’s own tomato sauce) and polenta (warm cornmeal with porcini mushroom reduced in brandy with sautéed spinach and marscarpone). Everything was delectable. 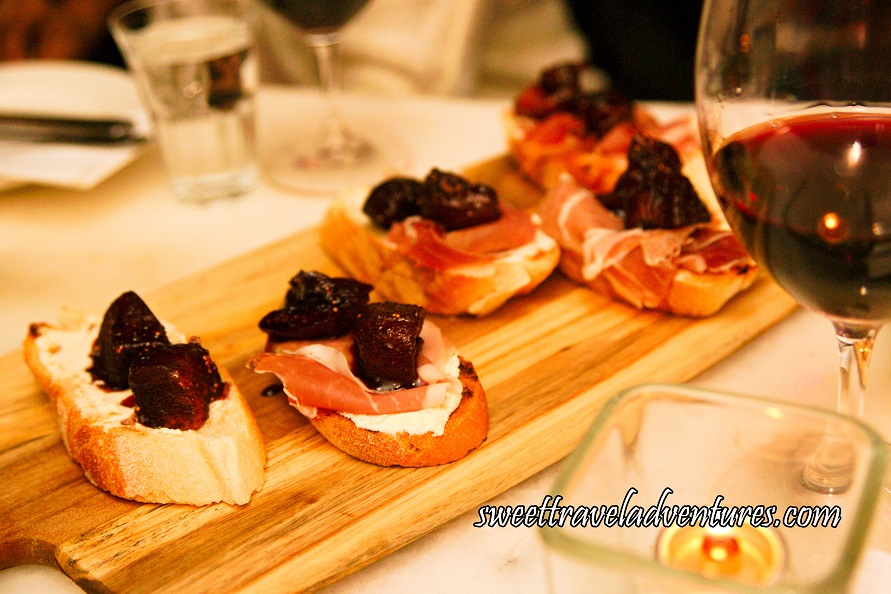 The next stop was Hapa Izakayas. It was a short walk west on College Street (less than half a block up). “Hapa” means half and half or mix and “Izakaya” means small plates of food paired with drinks. This family run restaurant’s mission is to “combine traditional Japanese ingredients with untraditional flavours.” They provide ocean-friendly seafood choices, in other words all fish served are wild, not farmed. Gluten free dishes are available as well. There is a fixed menu, an ever-changing ‘fresh” menu that reflects what is in season, and a prix fixe menu for 2 or 4-16 which allows patrons to taste a collection of both the restaurant’s favourite and seasonal menu items. Every Tuesday and Wednesday a special menu for dinner is additionally offered. This location was voted one of the “Top Five Izakayas In North America” by Bon Appétit Magazine. It was also awarded top choice in the “Industry” for Best Japanese in 2012 and “Readers Choice” for Best Izakaya in 2014 by Georgia Straight awards, as well as “Best Casual Chain” by Vancouver Magazine from 2011-2014.

At Hapa we drank sake (or saké), sometimes referred to as rice wine. For those unfamiliar with sake, it is an alcoholic beverage of Japanese origin which is made from fermented rice and produced by a brewing process similar to that of beer. This was my second time drinking sake and I found it cool and refreshing, and not sweet at all. Sake can also be served hot during the winter months, but we opted for the cold kind. Along with the sake we sampled Fire Cracker Oshisushi, which is pressed sushi that is torched at your table in front of you. It is made up of Albacore Tuna, cucumber, tempura bits, and tobiko (flying fish roe), with spicy mayo on the side. This dish was fantastic! I am not usually a fan of tuna or fish roe, and to be honest the only reason I ordered this dish was because I wanted to try sushi at this restaurant and had never had torched sushi before and wanted to see how they did it. This dish turned out to be quite delicious and did not have the usual strong fishy smell and taste of tuna, nor the granular potent taste of fish roe. We also ate Ebi Mayo (beer battered prawns made with crostini and served with mentaiko mayo sauce), Ika (grilled squid with sake soy garlic marinade), and Hapa Wings (Yuzu salt & pepper fried chicken wings with bourbon maple soy dip). We thoroughly enjoyed every dish, including the squid which was tender and flavourful, which is not always the case at many restaurants.

Ambience – Bright, vibrant, modern, and upbeat place to hangout, with top 40 music playing in the background, and sports playing on the TV screens with the sound muted. 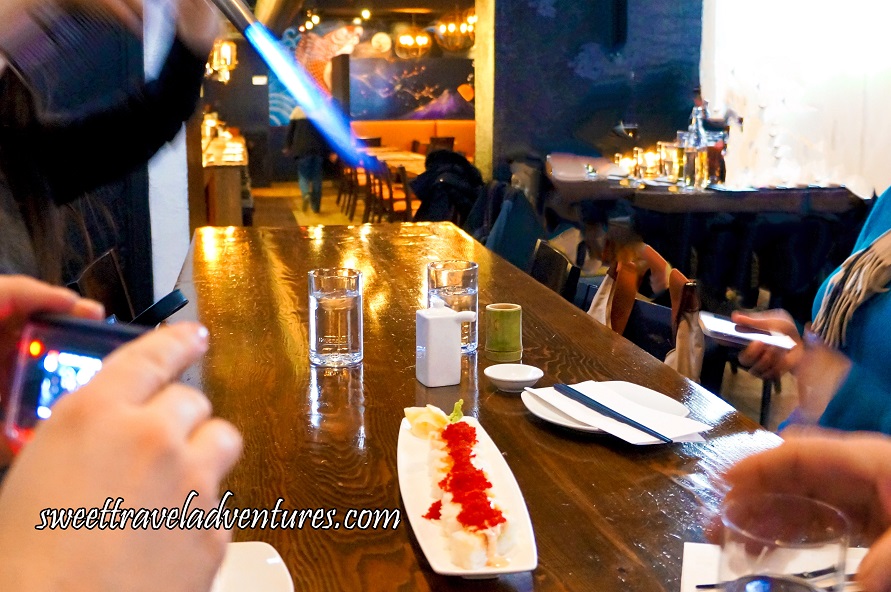 The final stop was Trattoria Taverniti, which is east on College Street and a couple of restaurants down from Sotto Voce. It is a family run Calabrian trattoria (an informal Italian eatery, usually small with inexpensive dishes and a limited menu). The mother/son/grand-son team uses regional family recipes that were passed down through the generations. As Chef Scott explained to us, “it is not the fanciest food but it is food the mother/grandmother made for her family and has a story, which makes it a unique experience.”

At this establishment we were served a Gorgonzola Mozzarella Pizza (white sauce with gorgonzola, toasted walnuts, pear, extra virgin olive oil, and drizzled with honey), eggplant parmiagiana or in Italian “Parmiggiana di Melanzane” (layers of breaded eggplant baked with parmigiano, mozzarella, and Taverniti’s pomodoro sauce), and for dessert tiramisu (a classic Italian dessert that is coffee-flavoured). The pizza was slightly sweet instead of the usual savoury, which was a nice twist. The other dishes were also very satisfying. The food was paired with a Chianti wine that was quite different from the Chianti wine we had at the first restaurant, but was also good. This wine was a 2013 Geografico Chianti Colli Senesi DOCG and was made up of 90% Sangiovese and 10% Canaiolo. It was also medium bodied and fruity, but in addition was spicy with mild tannins (an organic substance that tastes dry, astringent, and bitter in wine while also adding complexity).

At the end of the meal we were brought complimentary cookies, which were somewhat similar to shortbread cookies, and a shot of limoncello (a lemon liqueur). If you have never had limoncello before it is quite lemony and is sweet, tart, and refreshing, without being sour or bitter. I quite like this drink and this home-made limoncello by the Taverniti family was no exception (many families often have their own recipe).

Ambience – Small and cozy, traditional old school Italian, had red and white checkered table cloths with a red rose in an old glass coke bottle that served as a vase at every table. There were also old black and white classic movies playing on the TV above the bar with the sound muted and vocal jazz music playing, such as Tony Bennett and Frank Sinatra. 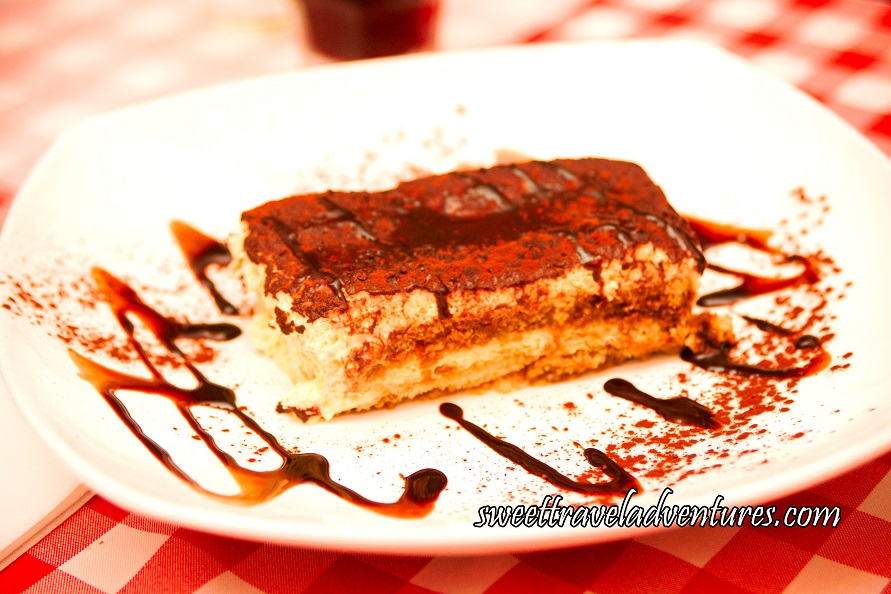 Chef Scott shared some of his favourite local spots of Little Italy for this food tour as he is a resident of the area, hence why it is called the “Chef’s Tour.” This culinary tour is different every week in order to keep it new and exciting, as many tour participants choose to repeat it. There were no menus used (except at the second restaurant), so our culinary journey was entirely in the hands of Chef Scott and his culinary peers. Even though this meant that we did not have to worry, at moments this scared us as some dishes we would never have ordered (such as the mussels and squid), but ended up delighting us as we enjoyed them immensely, resulting in a true culinary exploration. This was a terrific way to get to know a popular quadrant of Toronto! I have dined at wonderful restaurants in Little Italy before, but it is nice to have the suggestions of a culinary chef and local of the area. I can’t think of a better way to get to know a culture than through its food, especially in Toronto. It is a fabulous place to have a culinary adventure!


Check Out the Video of My Food Tour Experience!


Map of Where Little Italy is Located in Toronto

What is your favourite neighbourhood to visit for its cuisine and where is it located?


This was a complimentary tour courtesy of The Culinary Adventure Co. As always, all opinions are 100% my own.

2 thoughts on “Eating My Way Through Little Italy on the “Chef’s Tour!””