New Brunswick, Canada has a rich cultural heritage which includes Acadian culture (Acadians are French colonists who settled in Acadia during the 17th and 18th centuries whose descendants developed a distinct history and culture which was quite different from the Québécois). This is an important part of Canada’s past and present. Some fantastic ways to learn more about the history and culture of New Brunswick, as well as Acadian culture, are to: 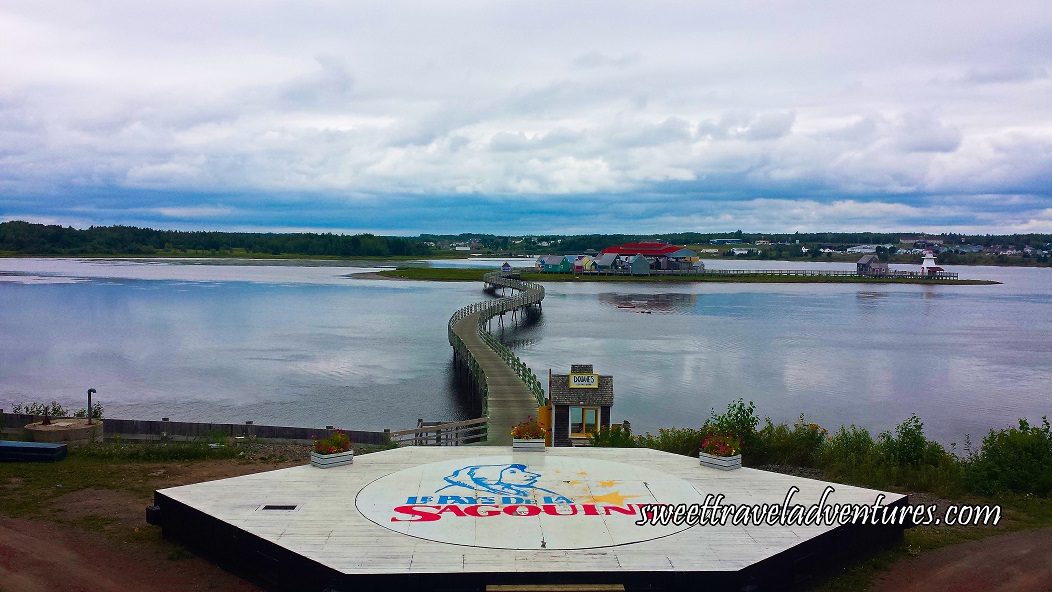 Le Pays de la Sagouine is a reproduction of an Acadian prohibition-era fishing village on a tiny island in the town of Bouctouche, New Brunswick. Bouctouche is 35.5 km (22.1 miles) or 26 minutes from Shediac, or 56 km (34.8 miles) or 45 minutes from Moncton. The village and its unique characters are based on the award winning novel “La Sagouine” by Antonine Maillet, an internationally renowned Acadian novelist, playwright, and author. 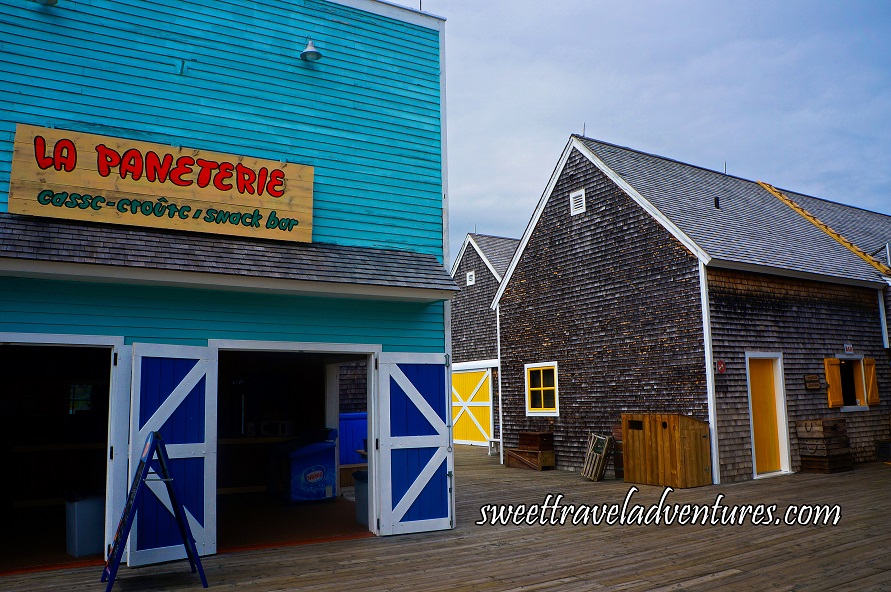 Once you arrive at Le Pays de la Sagouine you have the option to walk across the curved bridge to the tiny island called l’Île-aux-Puces (Flea Island) or have someone drive you across in a golf-cart to explore the Acadian village which has many colourful buildings, shops, and houses. We chose to have someone drive us across the bridge as it was quicker and the ride was fun with scenic views across the water. Around the village we got to go inside the buildings, shops, and houses, to see how they were back in the 1940s and there were several people dressed up from that time period who were very friendly with many tales to tell. Additionally, we had the opportunity to see an interactive cooking demonstration and sample some Acadian food that was cooked up fresh at Matilda’s Kitchen. There were also theatrical performances in French. 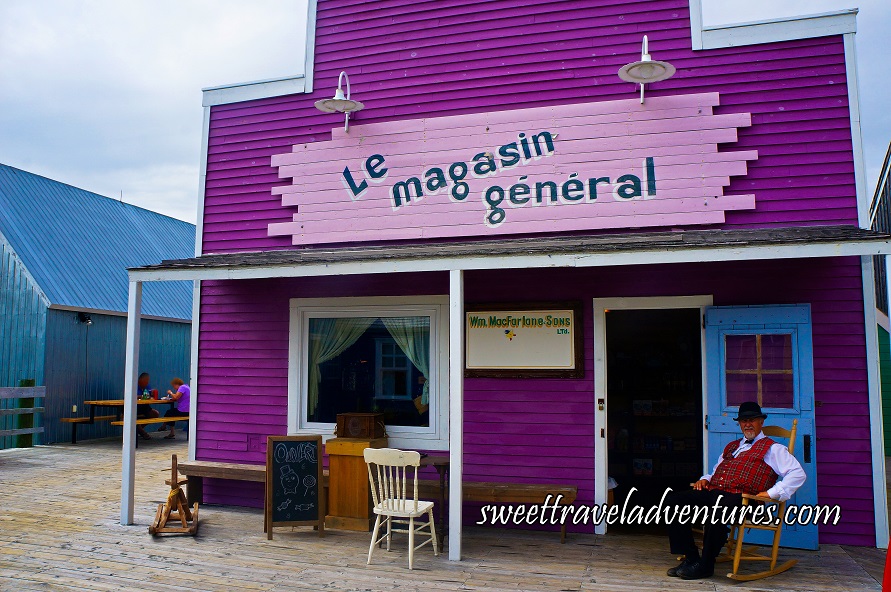 Tours of the village are offered at specific times and there are Acadian music performances scheduled at certain times as well. Near the entrance of Le Pays de la Sagouine is a gift shop, the Antonine-Maillet Museum, and the restaurant L’Ordre du Bon Temps, which offers Acadian cuisine with a terrace overlooking the Antonine-Maillet Stage, the water, and the island. Moreover, in the evenings throughout the summer and holiday season there are dinner theatre shows available. 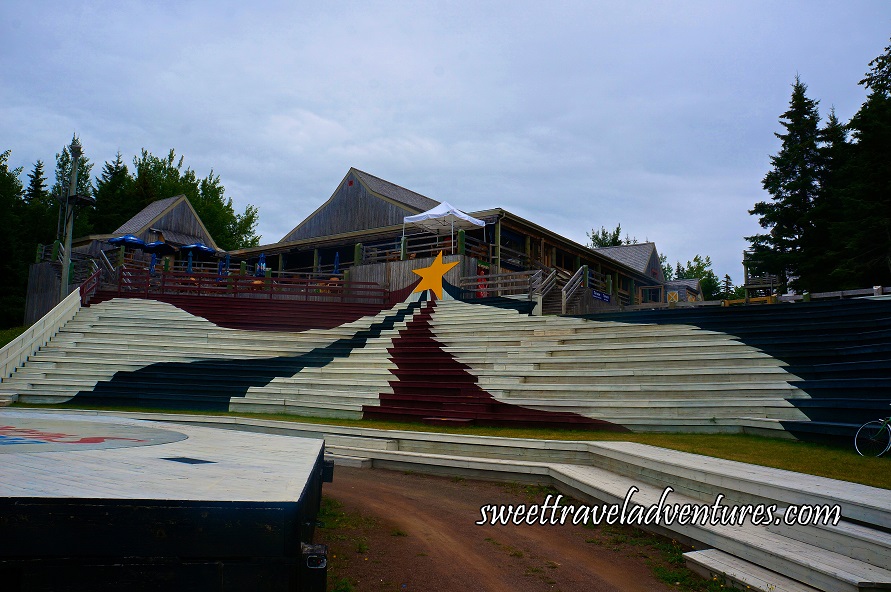 Le Pays de la Sagouine is a very unique experience. What’s more, it is a Canadian Signature Experience (offers an introduction to the best Canada has to offer).

There are a number of delicious traditional Acadian dishes to try such as Chicken Fricot, Poutine Râpée, Quahaug Pie, and Pets-de-Soeur, which can be found at restaurants in Shediac, Bouctouche, and Moncton, among other places. Food is one of my favourite ways to get to know a culture better. I tried Acadian cuisine at Restaurant L’Ordre du Bon Temps at Le Pays de la Sagouine and it was fantastic! 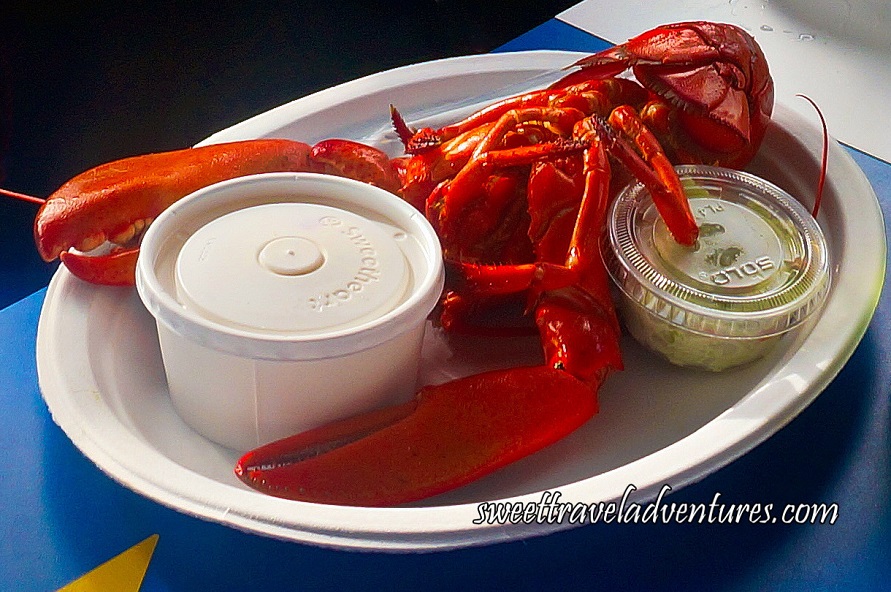 The lobster cruise begins in Shediac “the Lobster Capital of the World” where you will board a custom-built 16.2 meter (53-foot) boat with a 65-passenger capacity and cruise around the warm waters of Shediac Bay for 2.5 hours and learn about lobster fishing from a professional lobster fisherman.

On the enclosed lower deck you will be taught about the old and new fishing techniques used by the families of the local fishermen, find out how to haul lobster traps out of the water, how to tell the difference between a male and female lobster, how the locals cook lobster, and how to properly crack and eat a lobster. You will then get the opportunity to try out what you have learned by cracking and eating a freshly cooked lobster on-board, which is accompanied by a tasty maritime potatoe salad, coleslaw, and rolls. The dining area has picnic-style tables painted like the Acadian flag, which are a vivid red, white, and blue with a yellow star on the top left hand side of the flag (in the blue section).

Once dinner is over, you are given the opportunity to go on the upper deck to enjoy the panoramic views of the Northumberland Strait whilst you listen to Acadian music. 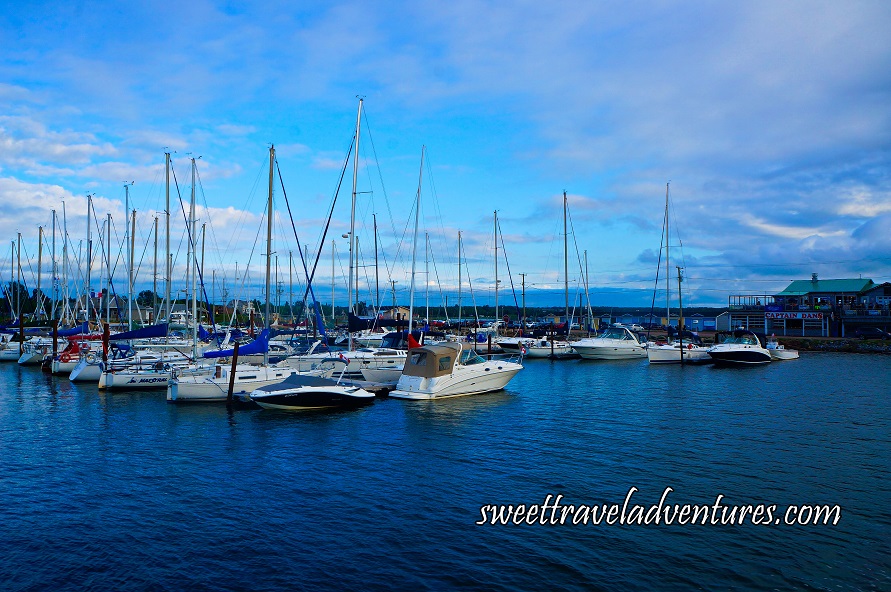 Learning about lobsters from the sea to your plate is another Canadian Signature Experience and gives you an additional look at Acadian culture. Tours are offered from June – September, or early October for groups, and given in both English and French. The presentation is very engaging for both adults and children.

There are lighthouses situated all along the Bay of Fundy coastline and Northumberland Strait as New Brunswick once had over 100 operating lighthouses. Today there are much fewer in operation and they are now automated, but most have history and information about the lighthouse posted, and in some cases, like the one in Shediac, you can even climb to the top to take in the awesome view it provides. The lighthouses were traditionally used to light the way for travellers as well as sea traders who carried goods by boat, maintained radio communications and beacons, tended to fog alarms, and provided rescue services and sanctuary for those shipwrecked. Unfortunately many of the lighthouses that once stood have been torn down or have been relocated, but fortunately lighthouses are now protected as heritage sites. 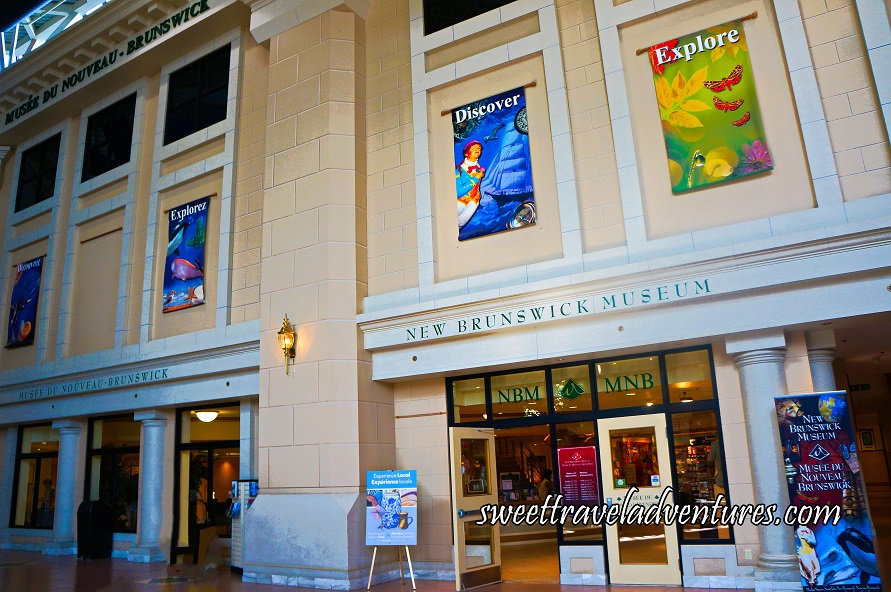 The New Brunswick Museum is located in Market Square in Saint John, New Brunswick and is Canada’s oldest continuing museum. It is connected to the city’s indoor pedway system (elevated walkways) which links buildings together for quick, easy, and comfortable movement. The museum was officially incorporated in 1929 as the Provincial Museum, but its history dates back even further to 1842 when Abraham Gesner opened the Museum of Natural History, which was the predecessor of the New Brunswick Museum.

Today’s current museum showcases New Brunswick’s rich cultural and diverse natural environment on three floors and 5,574.2 square meters (60,000 square feet) of permanent, temporary, virtual, and traveling exhibitions and exhibition catalogues. On display is the world’s only permanent gallery of historical and contemporary New Brunswick fine art and includes works by painters and sculptors, as well as historic Canadian art, historic international art, and decorative arts. The “New Brunswick Industry Gallery” showcases the development of the province through the work people did including farming, fishing, lumbermen, factory workers, inventors, retail clerks, and personalized services. The “Wood, Wind, and Sail Gallery” is about marine history and includes shipbuilding, overseas trade, ships at sea, risks at sea and shipwreck, navigation, life at sea, foreign objects and souvenirs, ship carvings, and parts from the famous Marco Polo. The “Birds of New Brunswick Gallery” so far has 116 species of birds on display (and is growing) of the more than 370 species documented in the province. The museum maintains the largest research collection of bird specimens in the Maritimes. “Our Changing Earth Gallery” introduces the complex geological history and rich fossil deposits of New Brunswick. In the “Hall of Great Whales Gallery” you will learn about marine life in the region, which includes a variety of whales and seals that can be found in the Bay of Fundy and the Gulf of Saint Lawrence. Conservation efforts have been made for many of these marine mammals and they are now protected, such as the Right Whale. This gallery displays the finest eastern Canadian collection of assembled whale skeletons, as well as life-size full-body models of several whale species. Finally, the “Discovery Gallery” encourages learning through play with its mini displays, touch objects, educational crafts, great wall visuals, hands-on learning and experiences, books, a 3-dimensional puzzle, games, and more.

The exhibitions are fascinating and you can easily spend a whole day there if you want to thoroughly experience, discover, and research all the museum has to offer. In addition, a wide range of programs and events are offered. Furthermore, there is a Museum Shop which features products created by local and regional artisans, among others. I really enjoyed the museum as it gave me a better understanding of many parts of New Brunswick, even if I had been previously introduced to those areas before.

Go to the Saint John City Market and Try Some Food 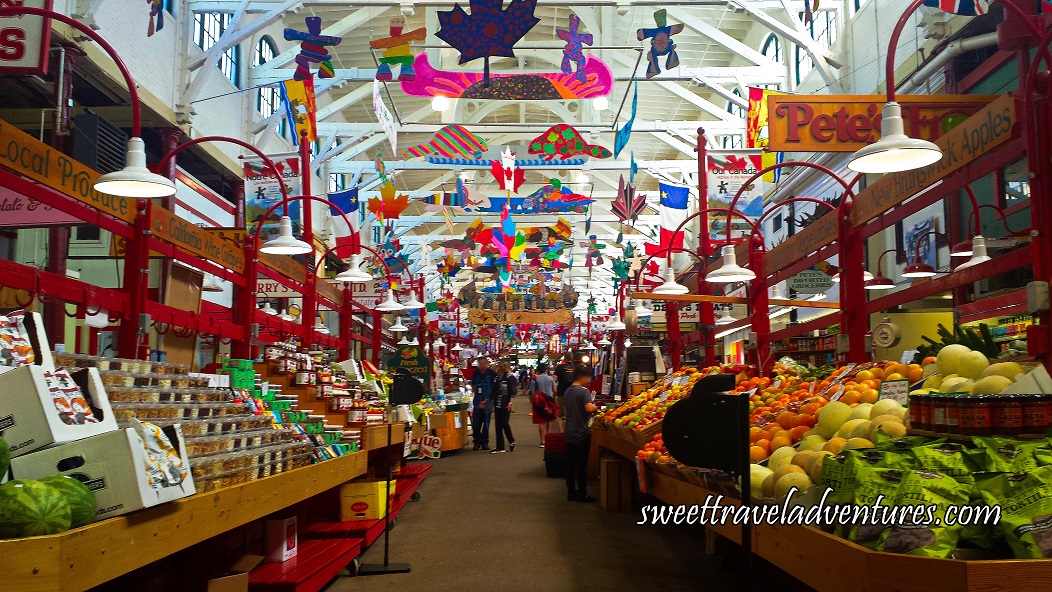 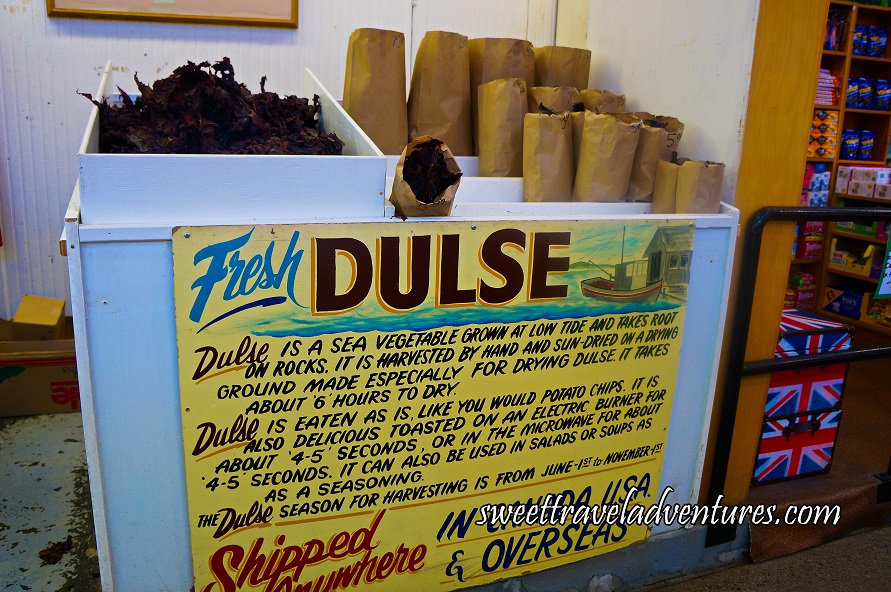 The market building was originally constructed in 1830 and its roof resembles the inverted keel of a ship as Saint John used to be one of the leading shipbuilding centers in the world. There were over 400 colourful hand-painted mobiles depicting Canadian icons such as canoes, animals like beavers and loons, maple leafs, and Inuksuk (stone figures resembling a human used by the Inuit for communication and survival) hanging from the rafters. They were a collaborative effort between the city of Saint John, the market merchants association, local artists, and over 1,450 children and staff from numerous schools and a daycare. The artwork will be sold for charity and most likely a new mobile theme and artwork will be created for the summer of 2016. As well, there are flags from around the world hanging throughout the market. Many of the historic parts of the market you can learn about in the Saint John City Market self-guided tour which explains things of interest in the market.

On Saturdays throughout the year there is a free live concert series and the market also features additional vendors with international flavours and artisan works. I visited on a weekday afternoon when it is less crowded.

It was very interesting to walk around the Saint John City Market and check out its setting and all the different offerings. The food was very tempting, so I tried the halibut fish and chips from one of the restaurants and it was delicious! The Saint John City Market is a unique shopping experience for both locals and visitors. It is open year round from Monday through Saturday. Trying some food at the market is an absolute must! 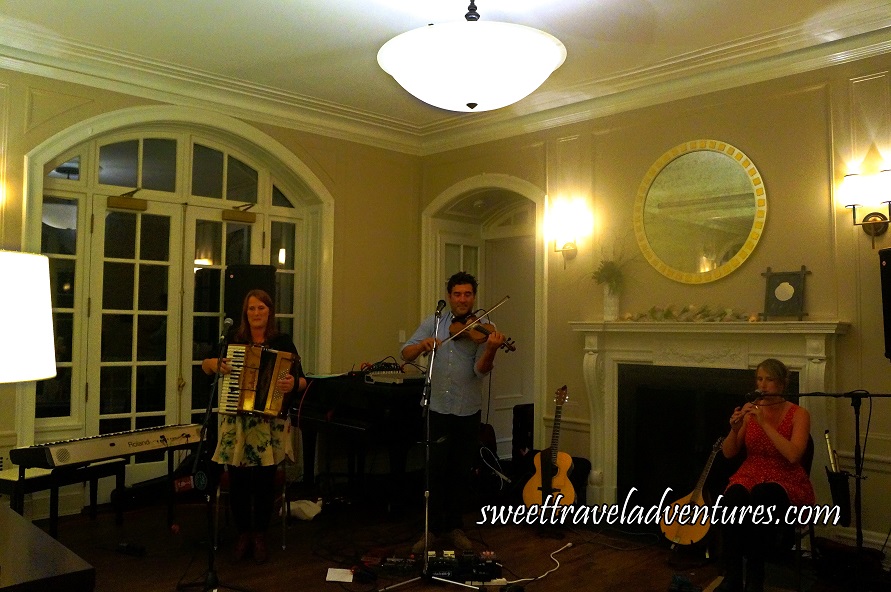 Acadian music from New Brunswick often features folk songs in Acadian French accompanied by lively dance tunes and bluegrass and country-western fiddling. Besides at Le Pays de la Sagouine, you can also listen to live Acadian bands at various bars, restaurants, and festivals around Moncton and the north-eastern regions of New Brunswick. I was lucky enough to see an Acadian band play at the Algonquin Resort in St. Andrews-by-the-Sea, which occasionally hosts different Acadian music performances. The band was incredible! They are named Vishtèn and are French Acadians from Prince Edward Island and the Magdalen Islands. Vishtèn has won numerous awards and have performed worldwide, including at many prestigious events such as the Vancouver Winter Olympics, Les Printemps de Pérouges in France, the Woodbury Folk Festival in Australia, among others. After learning more about Vishtèn I feel even more fortunate to have heard them perform.

There are numerous festivals on the Saint John Waterfront throughout the year which promote arts and culture, including music.

Map of the Bay of Fundy

Location of Bay of Fundy in New Brunswick, Canada

What is your favourite cultural tourism experience and why?

This was a complimentary trip courtesy of New Brunswick Tourism. As always, all opinions are 100% my own.