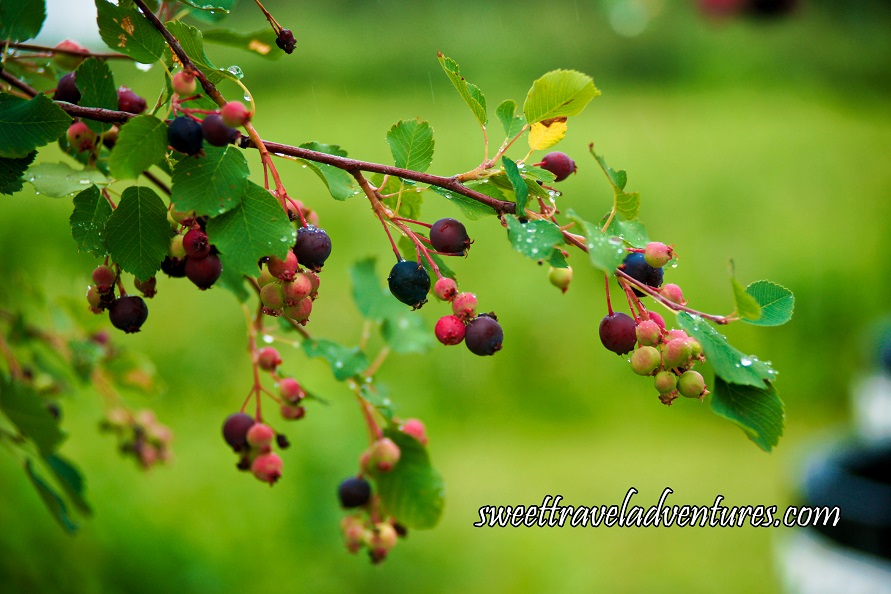 Saskatoon Berries on a Bush on Pearson’s Berry Farm

Pearson’s Berry Farm is the first commercial saskatoon berry orchard in the world. Saskatoon berries, commonly referred to as saskatoons, are a member of the apple family. They are purplish-blue berries which grow wild in open woods, along stream banks, and on dry slopes on a bush. The word saskatoon comes from the Cree word for the berries, mis-sask-quah-too-mina. Saskatoons were very important to the Native peoples of Western Canada as they provided food and medicine. 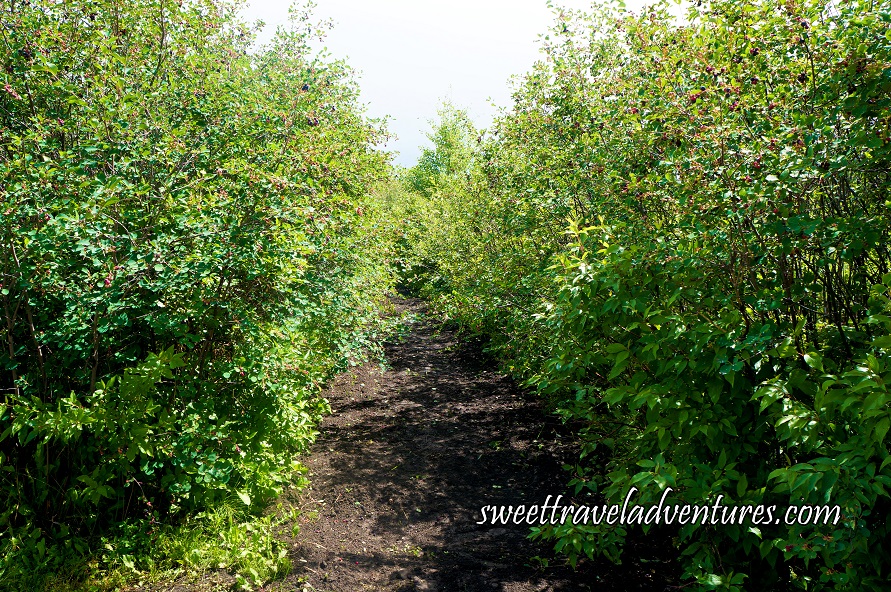 This berry farm is located in the peaceful Red Deer River Valley west of Bowden, Alberta, Canada. The orchard has mostly saskatoon berries, with a few rows of chokecherry, rhubarb, and black currants. It is comprised of six acres which is divided into three sections, with three varieties of saskatoon berries; northline, thiessen, and smoky. The varieties mature at different rates so this makes it ideal for u-pick. U-pick means the orchard is open to the public for picking every July and depending on the quantity of production may last up until the September long weekend. We were allowed to pick and eat some of the berries off the bush and it was nice to get to choose which berries we wanted to have. 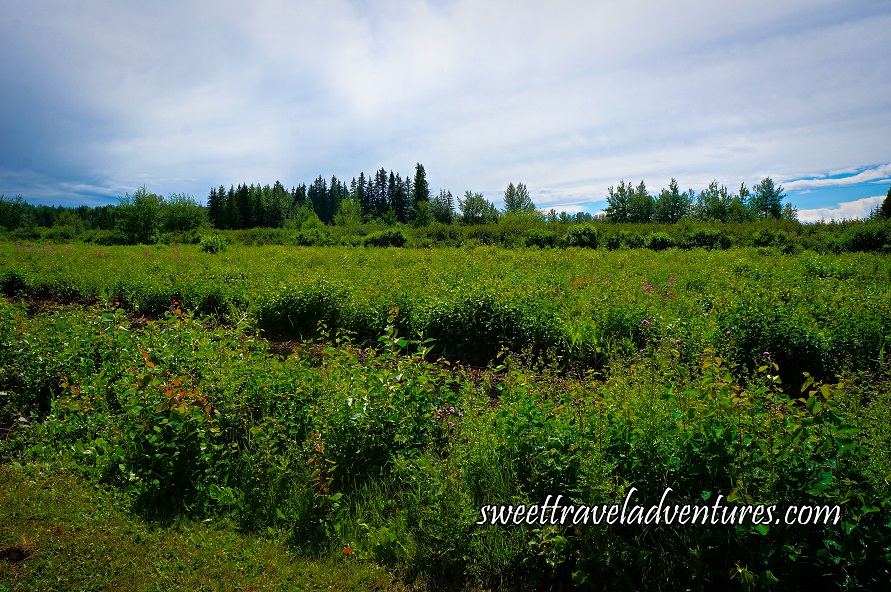 One third of the orchard is always out of production (in rotation) as the bushes are cut right down to the stump and it takes 3 years for the berries to come back into production (rejuvenate). The bushes usually produce berries for 6-7 years before they are cut down again. 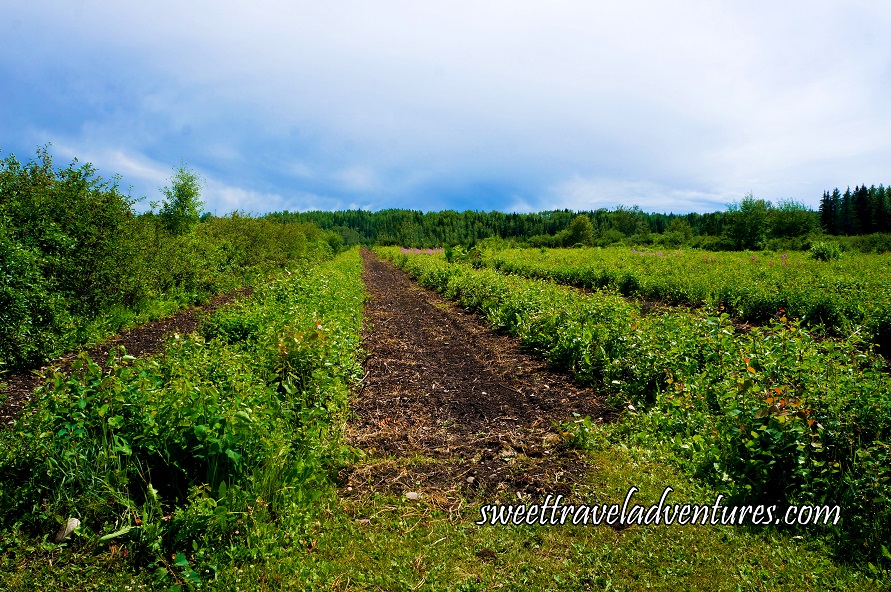 Duane Mertin told us about the history of the place and how he and his wife, Debbie, came to own it. They bought Pearson’s Berry Farm twelve years ago, which also has syrups, jams, pies, and buttertarts. They felt that the farm was a good fit with their business, which they started twenty-three years ago. Duane and Debbie first started selling apple cider concentrates when they moved to Saskatoon, after leaving a family farm in Southwest Saskatchewan with no job and no skills, and so they had to start from scratch. They managed to scrounge up the money to produce 1, 000 little brown jugs and set up in Market Mall in Saskatoon and sold them in 2 weeks before Christmas. 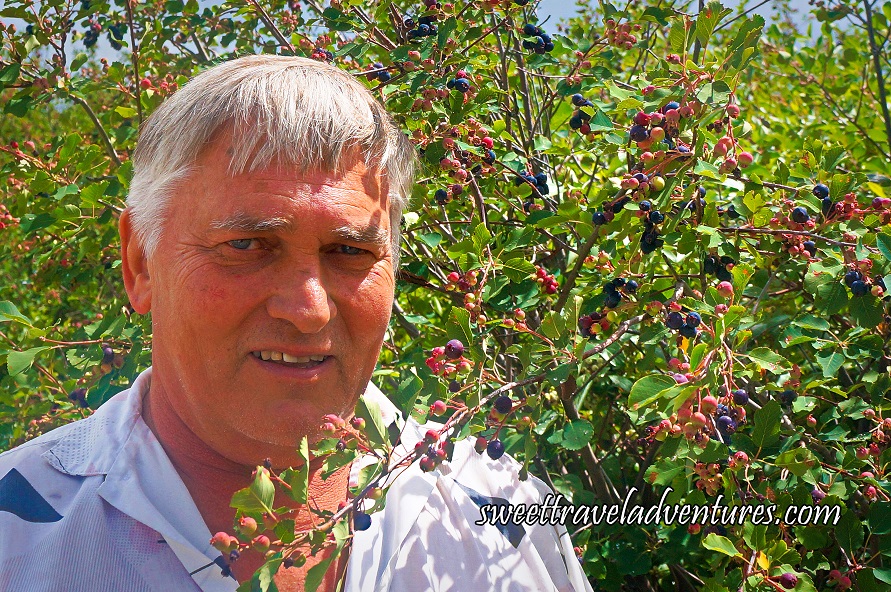 Duane and Debbie then expanded on their growing business and started making saskatoon berry lemonade and raspberry lemonade. These cold lemonade concentrates mix 7 to 1 with cold water, 9 to 1 with soda water, 5 to 1 with margaritas, 3 to 1 for popsicles, or you can splash a little in your ice water for flavouring.

After Homestyle Beverages (the brand of the hot and cold concentrates), about 16 years ago, Duane and Debbie took over Gordo’s sauces from a friend. Gordo’s Greek Sauce is what the business had originially been built on and is still the most popular sauce. It is lemon based with Greek seasoning and oregano and garlic. It can be used for marinating chicken, pork, lamb, ribs, souvlaki, and greek-style potatoes. I tried it myself with chicken and it was quite tasty. The other two sauces, Gordo’s Ginger Thai Sauce and Gordo’s Teriyaki Sauce can be used for stir-fries, wraps, and rice dishes. Lastly, Gordo’s Pepper Sauce is perfect for barbequing. Gordo’s Sauces can be found at Co-op stores.

The beverages and sauces are now made at the orchard along with the rest of the Pearson products (all from scratch). The syrups, originally made by the Pearson’s, are available in chokecherry, black currant, raspberry, and saskatoon flavours. They are ideal for pancakes and waffles. 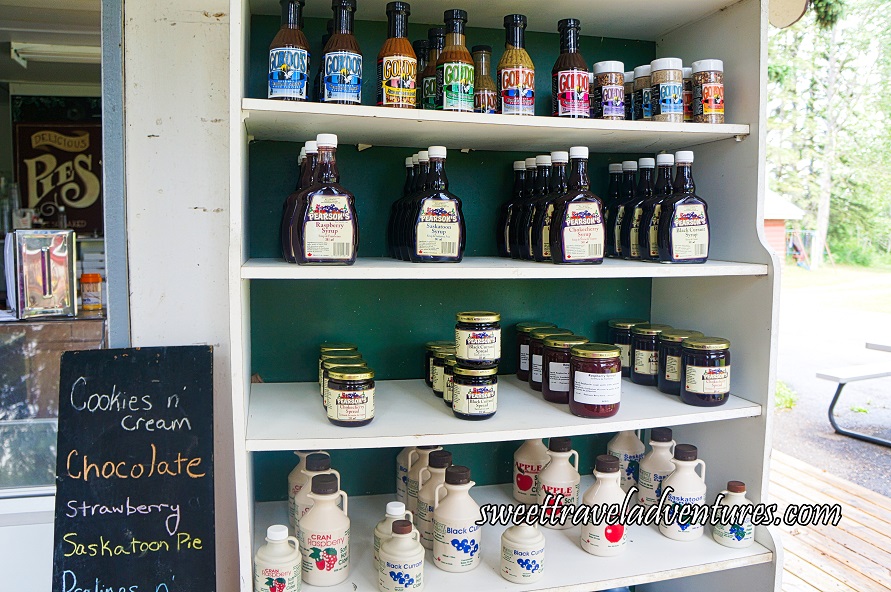 The smell wafting over from the baked goods was amazing. It lured us into the kitchen to get a tour and see how all the baked goods were made. A lot of the original machinery had been replaced and was new. First there was a berry cleaner. Duane explained that the berries go in the front where there is a fan that blows a lot of the stems and small berries up and out the chute and then the good berries come out of the conveyor. The employees hand sort the berries on the conveyor to take out the green berries and if there are any other stems left. Once the berries go through the conveyor they are nice and clean and ready for going into pie filling. The berries are then weighed and put into a huge steam kettle that cooks 300 lbs of berries at a time. They then either make pie filling or juice from the berries in the kettle. The juice is used to make the syrups, and to flavour the ciders and lemonades.

The pie pastry is made from scratch with some help from machinery. They make it in a mixer and there is a machine that divides up the pastry. Presses then press the pie and tart shells and somebody fills it. The pies and tarts then either go on trays for freezer pies and tarts or go into the oven to bake. Once they come out of the oven they cool and then get boxed up and sent to the markets. The pie varieties available are saskatoon, black currant, saskatoon rhubarb, saskatoon apple, apple, pumpkin, and strawberry rhubarb. We tried the saskatoon pie and there was no comparison between it and a supermarket pie. Simply scrumptious! 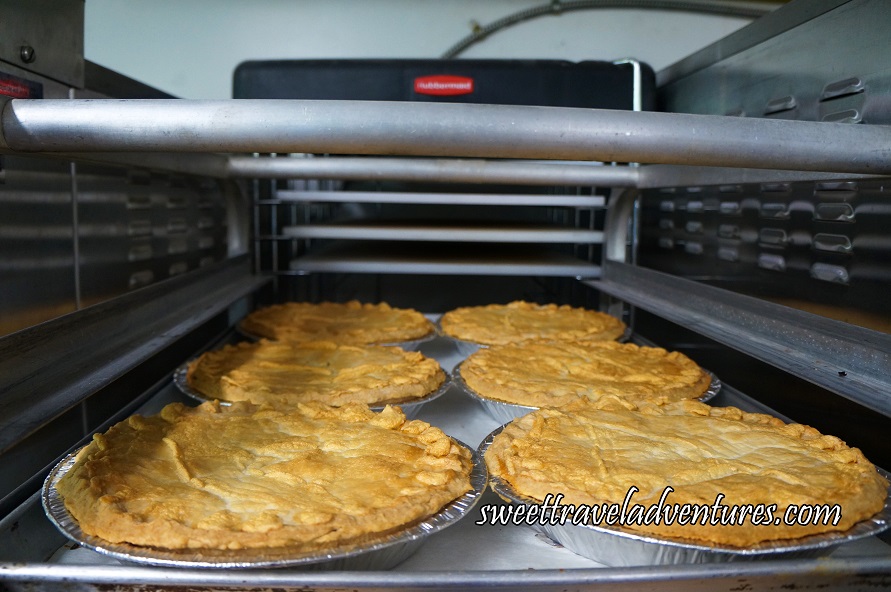 The buttertarts are made with the same pastry as the pies and are also available in a wide array of flavours, including traditional raisin, saskatoon berry, coconut, plain, pumpkin and chocolate chip. 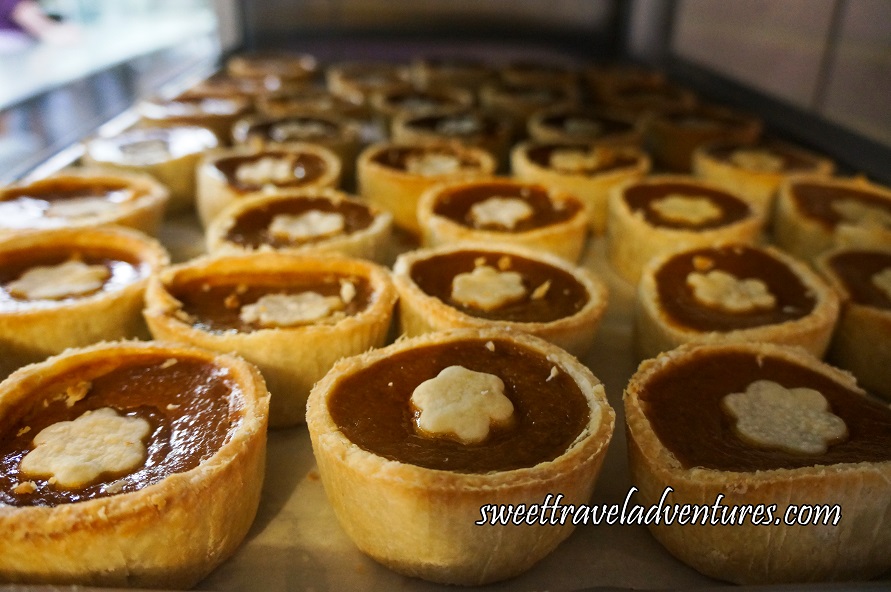 Lastly, muffins are also baked and sold. We tried the rhubarb pineapple flavour and it was simply delicious!

Duane and Debbie do a little bit of everything. They do farm gate, which means they have an outdoor café and sell pies, buttertarts, ice-cream (from Foothills Creamery), lemonade, hot ciders, and coffee. They also do direct sales at farmer’s markets, direct store delivery, supply direct food distributors like GFS, Cisco, and Don Foods, which in turn supplies restaurants, and they broker berries. They try to source all of their ingredients as locally as possible, such as bringing raspberries from BC to supply Wildrose Brewery in Calgary with raspberries for their Wraspberry Ale. In addition, they supply Foothills Creamery with saskatoon pie filling which Foothills Creamery makes into saskatoon berry pie ice-cream.

All the products made at Pearson’s Berry Farm are specialty gourmet products. It is a nut-free facility and they do not use any artificial flavours or colours. They make, bake, and grow all their own stuff. Normally at a farmer’s market you only need to do one of these things in order to sell products there. Pearson’s Berry Farm does all three, so this is quite impressive. 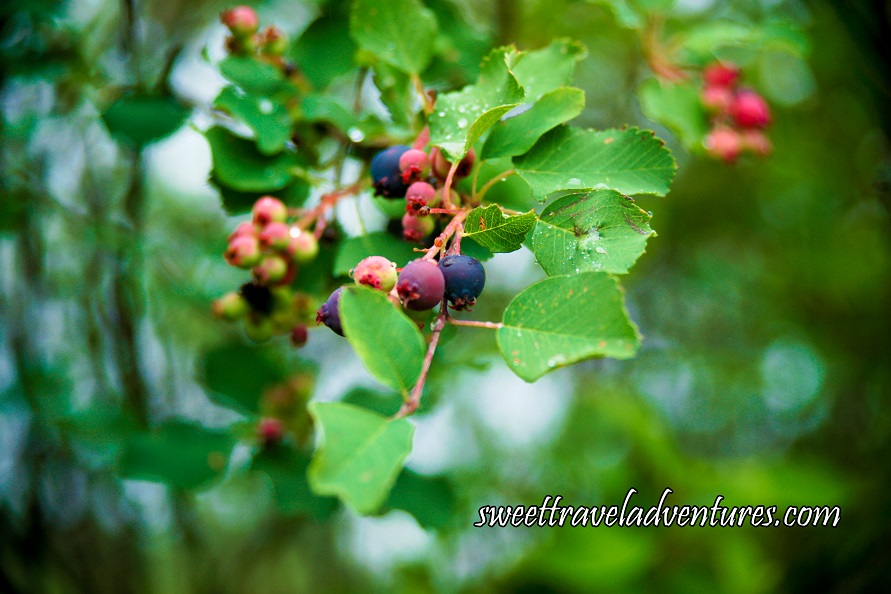 A visit to Pearson’s Berry Farm is a wonderful way to spend an afternoon in the summer and get a taste of agricultural tourism! If you have never tried saskatoon berry pie, it’s a must in western Canada!


Map of Where Pearson’s Berry Farm is Located in Alberta, Canada

Have you ever done or would like to do agricultural tourism? If so, where did/would you like to visit?

This was a complimentary tour courtesy of Pearson’s Berry Farm. I also received a complimentary muffin and bottle of Gordo’s Greek Sauce. As always, all opinions are 100% my own.


Information compiled from what was told to me by Duane Mertin himself, as well as Pearson’s Berry Farm’s website.