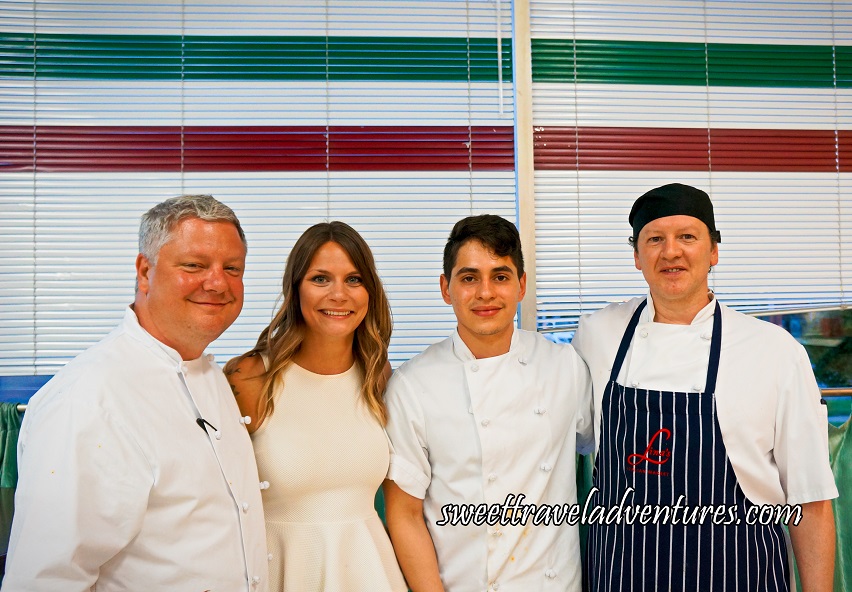 An intimate four-course family-style Italian dinner, created by Chef Keith Luce and served at Lina’s Italian Market in Calgary, Alberta, Canada (YYC), is a celebration of community and food! Lina’s Market Dinner is a monthly event, inspired by fresh Italian ingredients. It is an amazing opportunity to enjoy food by a chef that has cooked in five different 3 star Michelin restaurants; Buerehiesel in Strasbourg for Chef Eric Westermann, the original Alain Ducasse in Paris for Chef Alain Ducasse, Pierre Gagnaire in Paris for Chef Pierre Gagnaire, Louis XIV in Monaco (another of Chef Alain Ducasse’s restaurants), and Enoteca Pinchiorri in Florence, Italy for Chef Annie Féolde.

Chef Luce was the sous-chef at the White House for the Clintons when he was just 22, and was the youngest person ever to receive that honour. Moreover, Chef Luce was the executive chef of the Little Nell in Aspen, Colorado, a 5 star, 5 diamond hotel property, before the age of 30. He has received numerous awards and accolades including Food and Wine Magazine Best Chef, James Beard Rising Star Chef, Esquire Magazine Best New Restaurant in U.S., Crain’s business news top 40 executives under 40 (Chef Luce was only 25 years old at the time), was named a U.S. Culinary ambassador, and been a judge multiple times on Top Chef (USA).

Originally from the New York, USA countryside, Keith’s grandfather was Italian (on his mother’s side) and was an incredible chef with restaurants, pastry shops, and butcher shops. Thus, Keith learned to cook from a young age alongside his grandfather in the family’s restaurants growing up. Keith was also a 17th generation farmer (on his father’s side). His farm background allowed him to really get to know ingredients intimately as he also worked on the family farm throughout his childhood.

When Keith graduated from high school he moved to New York City and began working in renowned fine-dining restaurants such as Le Cirque, La Cote Basque, and the Rainbow Room. Later on in his career he was the executive chef of the internationally-renowned restaurant Herbfarm when it was named the number one destination restaurant in the world by National Geographic. Chef Luce had many restaurants, including in Chicago, Seattle, New York, San Francisco, and Napa Valley. His first restaurant, Spruce, was named best restaurant in the United States. Chef Luce has had projects in Japan, England, France, and Canada. Due to being a chef, he has been able to meet Nelson Mandela, Mohammed Ali, the Dahli Llama, many presidents, Michael Jordan, and several other well-known people.

Chef Luce’s extremely impressive resume made me tremendously excited to attend a Lina’s Market dinner, as well as its unique location, inside Lina’s Italian Market (a vibrant community market with imported and domestic Italian products, a full deli, bakery with fresh-baked goods, cappuccino bar, produce, kitchenware, a full specialty grocery line, and a cafeteria-style eatery). The long-table and communal platters made the experience very intimate and relaxed, and was a terrific way to meet and get to know other food lovers.

Lina’s Market Dinner is an abbreviated multi-course traditional Italian dinner. The four-course meal started off with a welcome drink of Prosecco followed by the welcome food (benvenuto), or first course, of “Angry” Arancini Verde. This was essentially green rice croquettes, white rice and mozzarella cheese with green spring/summer herbs and a spicy tomatoe sauce in the middle. The “angry” part is a play on words due to its spiciness. The Arancini Verde were fantastic! They were crispy, creamy, and fresh, with just the right amount of spice. It was the perfect way to get our appetites started, although we could have easily just eaten those alone and been happy, they were that good! 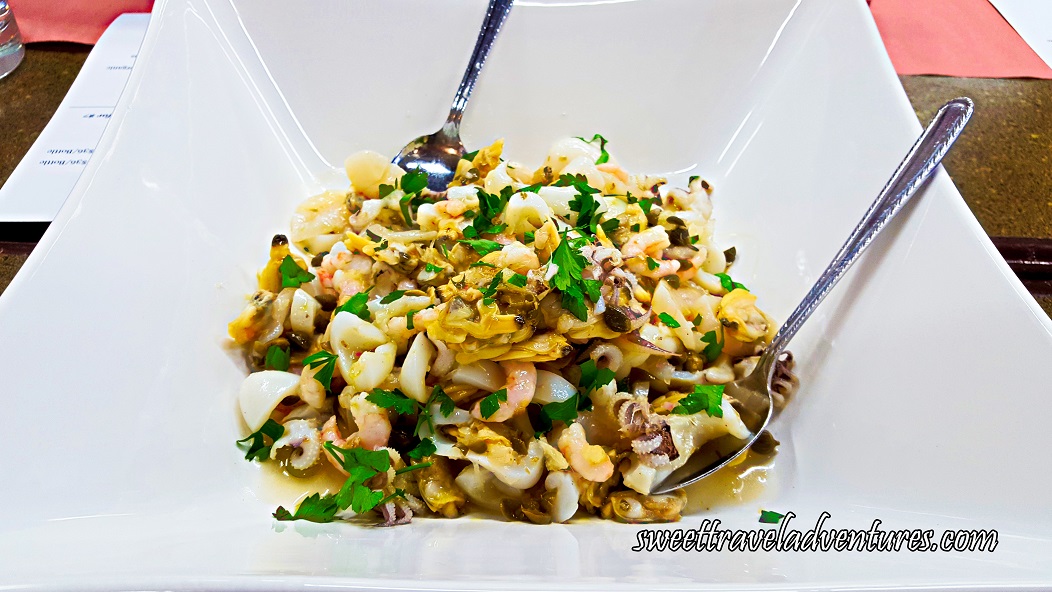 The second course or appetizer (antipasti) was a Seasonal Seafood Crudo (meaning raw) of shrimp, squid, clams, mussels, a white fish, and parsley with crushed citrus and Lina’s organic olive oil. This was served alongside a Salad of Early Summer with romaine lettuce, red and yellow peppers, red cabbage, cucumber, tomatoes, and parsley. Both dishes were very tasty, light, and fresh, with clean flavours. 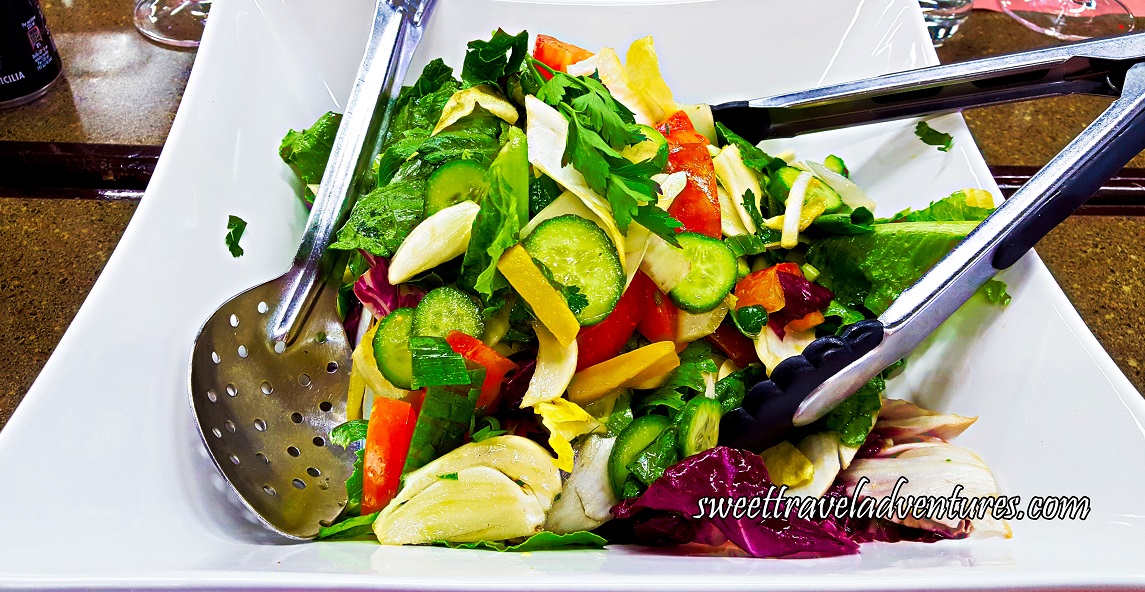 Next were the main dishes (third course); Bucatini L’amatriciana, Involtini of Pork with Prosciutto, and Artichokes.

Bucatini, also referred to as perciatelli, is a spaghetti-like pasta but thicker and tubed (there is a small hole running through the center). L’amatriciana means “made in the style of Amatrice” (a town in central Italy) and denotes a pasta sauce made with guanciale or pancetta, tomatoes, and may or may not be spicy (have dried chili peppers). It is a very traditional dish and is often associated with Rome.

In this dish the tomatoe sauce was made of DOP designated San Marzano Tomatoes (designated by the Italian government as grown in a specific place and prepared in a specific traditional manner to protect and continue those traditions) and finished with guanciale, garlic, a little bit of spice (toasted chili), and some pecorino cheese. This bucatini dish had a sophisticated red sauce and was very enjoyable. It was easy to see why it is one of Chef Luce’s all-time favourite pasta dishes, if not his favourite. He likes the simplicity of Italian pasta dishes, but that they are also complex. 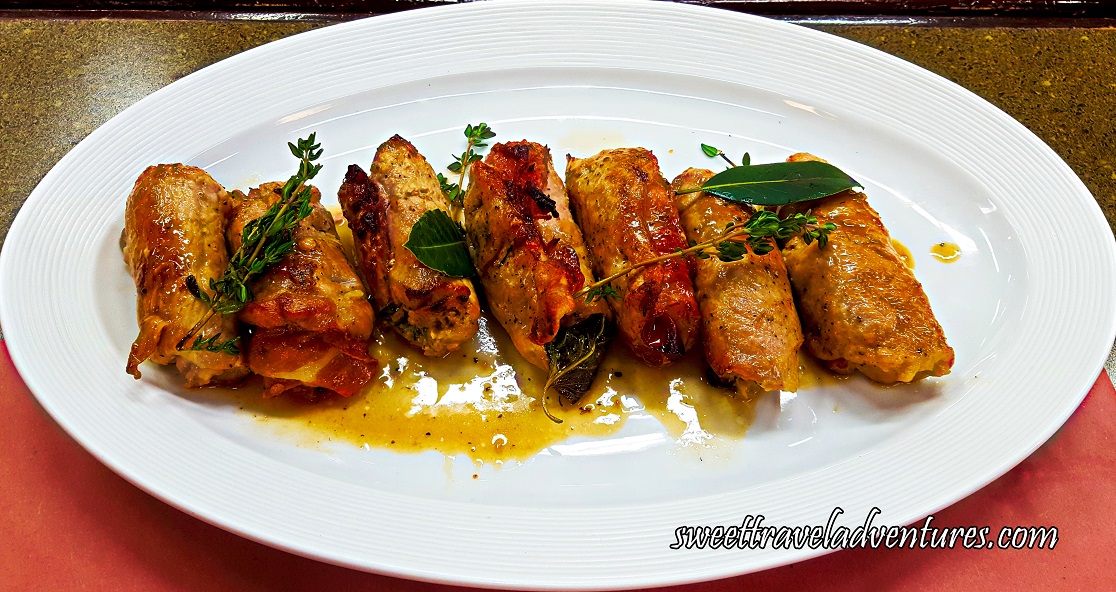 Involtini means rolled. In this Involtini of Pork with Prosciutto dish the pork was traditionally sautéed and deglazed with a little white wine and then rolled with prosciutto on the outside and cheese and basil in the inside. (In Italian cuisine the protein is traditionally served as a separate course). The pork was tender, moist, and delicious!

The Artichokes were mixed with mint, tomatoes, and olives and had more of a Southern Italian flavour profile. It was absolutely delectable, so much so it made me start thinking about adding artichokes to my regular diet! 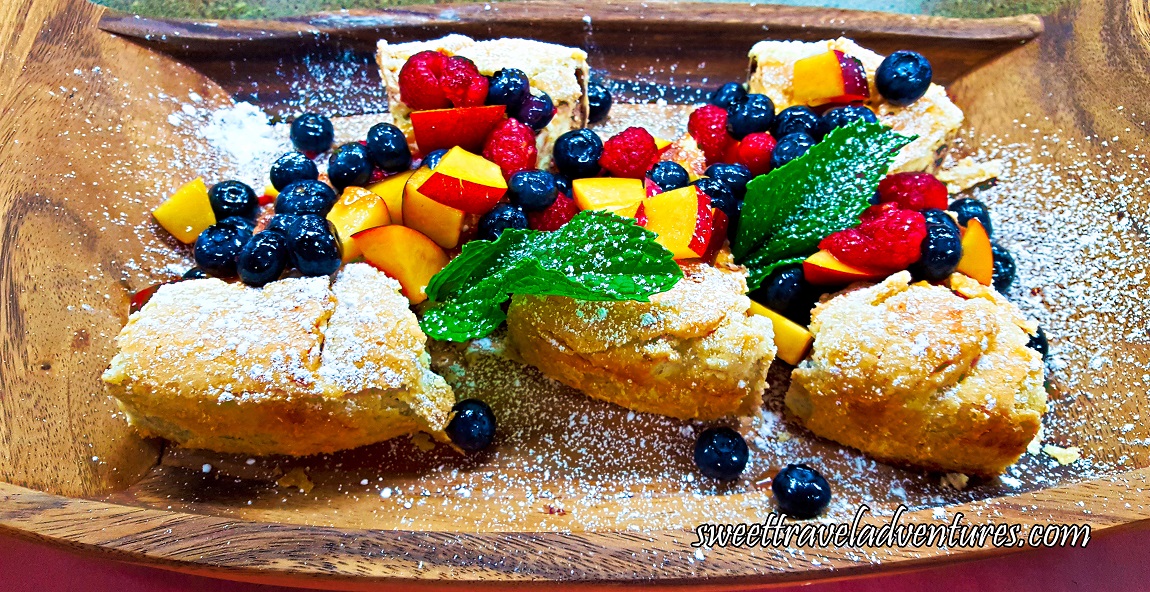 Lastly was Dolce, or dessert (fourth course) which was Crostada of Ricotta. Crostada is a free-form tart originating in Northern Italy and ricotta is from Southern Italy. The ricotta tarts had a tiny bit of chocolate at the bottom which was used to line the shell so moisture coming out of the ricotta didn’t ruin the pastry, but also added just a touch of sweetness. The tarts were topped with fresh fruit which included peaches, blueberries, and raspberries, as well as a couple mint leaves. They were then drizzled with Alberta honey and sprinkled with icing sugar. This dessert was heavenly and just as appealing as it looked! This is Chef Keith’s all-time favourite dessert. In his words it was meant to be “soul satisfying with humble ingredients.” Mission accomplished. I couldn’t describe it better.

Lina’s Market Dinner was an amazing experience, not just because of the fresh ingredients and wonderful dishes served, but the fact that the chef came out and explained a little bit about each of the dishes. Italian food is a rich, sophisticated cuisine with a lot of history and traditions that were experienced throughout the dinner. What’s more, all of the courses were made in Lina’s Italian Market just before being served, the dishes were not made ahead of time (so if you wanted to you could watch the chefs preparing the dinner). Furthermore, the intimate setting, and the family-style service that promoted conversations around the table, made the entire meal even more pleasurable.

Chef Luce enjoys doing market dinners because his connection to food came from farming and cooking and the dinners are a way for him to stay in touch with who he is, it grounds him, and gives him an opportunity to share his experiences. Most importantly, the dinners are “feeding the soul of the market” as it’s connecting everyone through food and gives people a sense of community and pride. I couldn’t agree more. 🙂

If you would like to attend the next Lina’s Market dinner, tickets can be found here.

What was your favourite dining experience? Why?

This was a complimentary dinner courtesy of Lina’s Italian Market. As always, all opinions are 100% my own.

2 thoughts on “Enjoy a 4-Course Dinner by a Chef That Has Cooked in Five 3 Star Michelin Restaurants and the White House!”